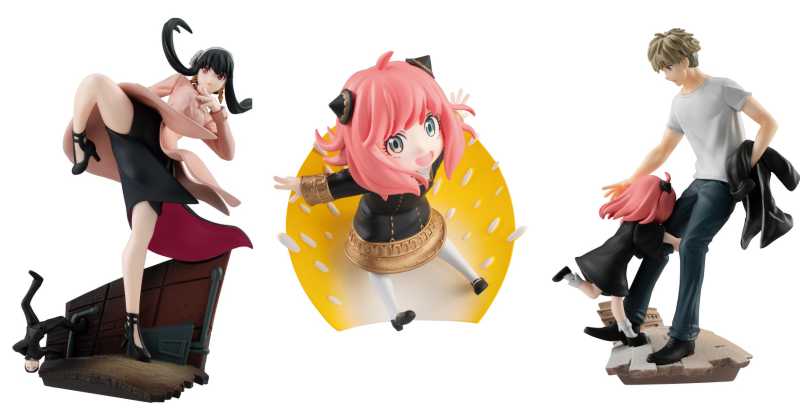 Spy x Family Launches Figures Inspired on Anime Scenes and the most important thing is that they are cheap figures, because they are from the Puchirama series, from Megahouse, the figures are much cheaper than the usual ones and the coolest thing about them is that they recreate scenes from the anime .

For example, below is the first figure, which recreates the scene from the first episode when Loid, after defeating the villains, sees Anya running towards him: This figure here is from the scene in the second episode when a villain comes jumping towards Loid and Yor protects him by kicking him away, it was creative the way they censored her for not showing anything of Yor’s body: And then there’s Anya trying out her school uniform, which episode is yet to air, so this figure kind of gives a spoiler ha ha. The figures are available on the CDJapan website for pre-sale.

For the agent known as “Twilight,” no order is too tall if it is for the sake of peace. Operating as Westalis’ master spy, Twilight works tirelessly to prevent extremists from sparking a war with neighboring country Ostania. For his latest mission, he must investigate Ostanian politician, Donovan Desmond, by infiltrating his son’s school: the prestigious Eden Academy. Thus, the agent faces the most difficult task of his career: get married, have a child, and play family.

Twilight, or “Loid Forger,” quickly adopts the unassuming orphan Anya to play the role of a six-year-old daughter and prospective Eden Academy student. For a wife, he comes across Yor Briar, an absent-minded office worker who needs a pretend partner of her own to impress her friends. However, Loid is not the only one with a hidden nature. Yor moonlights as the lethal assassin “Thorn Princess.” For her, marrying Loid creates the perfect cover. Meanwhile, Anya is not the ordinary girl she appears to be; she is an esper, the product of secret experiments that allow her to read minds. Although she uncovers their true identities, Anya is thrilled that her new parents are cool secret agents! She would never tell them, of course. That would ruin the fun.

Under the guise of “The Forgers,” the spy, the assassin, and the esper must act as a family while carrying out their own agendas. Although these liars and misfits are only playing parts, they soon find that family is about far more than blood relations.

Você Sabia Anime is a site originally in Brazilian Portuguese, this post is an Machine translation.