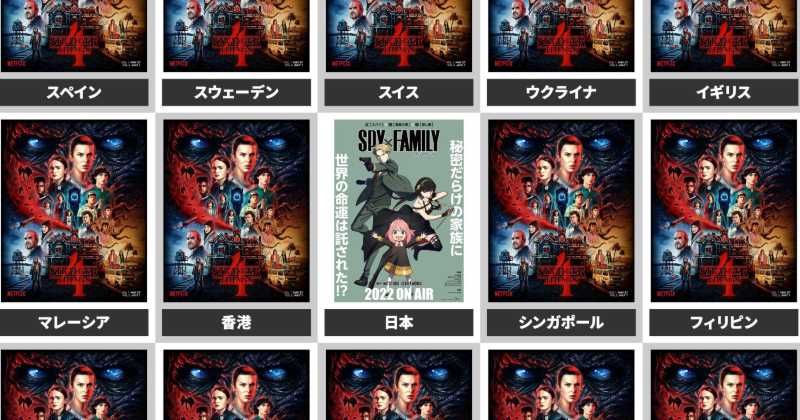 Spy x Family dominates Netflix in Japan while the world watches Stranger Things 4, a popular series that is loved by many people around the world.

Netflix itself provides a website where you can see the 10 most watched movies and series in each country, and a Japanese man decided to see the rankings for several countries, from the 23rd to the 29th of May, this was the result . He looked at the rankings in 65 different countries and noticed that only Japan had a different program as the most watched, precisely the anime Spy x Family (waku waku!).

Stranger Things 4 however is in 2nd place in the Japanese ranking, but it is interesting to see how the anime is winning over the series there. But… this is nothing new for Japan.

This is not the first time Japan prefers Anime

One person shared a ranking around the time the movie Avengers: Endgame opened in theaters around the world, and only Japan the Detective Conan movie won:

I went to check out the release date of Avengers in Japan and it was along with all the other countries, so yeah, Japan is different! The Spy x Family manga is being published in English by VIZ MEDIA, the anime is currently running.

An action-packed comedy about a fake family that includes a spy, an assassin and a telepath!

Master spy Twilight is unparalleled when it comes to going undercover on dangerous missions for the betterment of the world. But when he receives the ultimate assignment—to get married and have a kid—he may finally be in over his head!