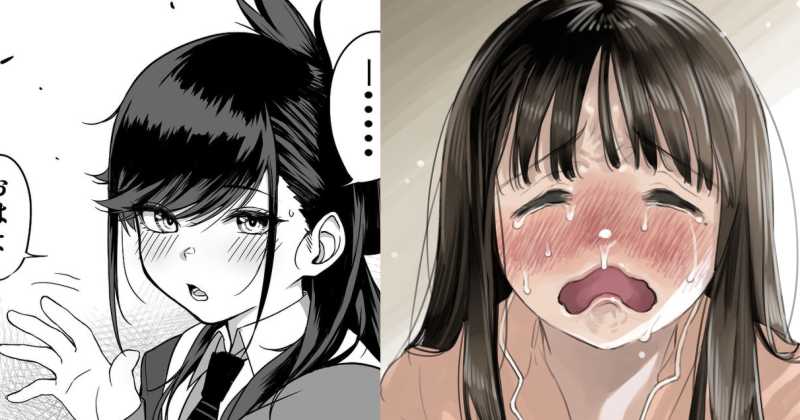 How popular is Netorare in Japan? Well, Netorare outsells Reverse NTR and Vanilla, let’s compare the sales number of the 3 genres?

Yes, but reverse NTR does exist, even though I am using the word “reverse”, it is all NTR in the end.

The two titles used in this comparison are:

Itabasami na Wakachi Ai is about 3 students, a boy interacts with two girls in his school, a classmate and a senpai from a class above.

One day the classmate invites him to “study” and well, she ends up proposing and they start dating, the senpai finds out about it and in one opportunity she gets she advances on him.

So the senpai gets the boy without his girlfriend finding out.

In the image above, we have the senpai celebrating that she abused the boy and the girlfriend at his house wanting to see him.

One day at his girlfriend’s house, the protagonist decides to take her cell phone, since the girl ended up dozing off, he starts going through the pictures on her cell phone when BUM, he finds out that she is cheating on him.

He thinks about fighting with her but he tries to pretend he never saw it, in the end she finds out he knows and the two talk, result?

She keeps meeting the good guy in bed and keeps dating this jerk, who accepts it.

How much did they sell?

We will compare the sales of the two manga on the FANZA and DLsite platforms, as they report the number of copies the titles have sold.

Itabasami na Wakachi Ai has two volumes, volume 1 came out in April 2020 and volume 2 came out in August 2020, a third volume was promised but never released, I guess probably because of the low sales of the previous two volumes?

Well, let’s go to the numbers.

Sales of the reverse NTR manga:

From what I could see, there is only this manga at FANZA.

Sales of the NTR manga:

In the last comiket, the artist Great Mosu decided to release another vanilla doujin of Satania instead of releasing an NTR manga.

Great Mosu has released 6 books in total, but we only counting 5 here, 3 vanilla and 2 NTR. Below is a print of his manga:

The print above comes from the FANZA store, where you can sell your adult doujins. From right to left we have the following.

Two doujins from Touhou (which are normal, one has hypnosis and the other is more vanilla), in the middle the first volume of his Satania doujin (vanilla too) and on the left side two NTR manga he released.

Some of these stores tell you how many copies each title sold, you know? So let’s see how much Mosu has sold here?

The DLsite store also reports their sales data, and there the situation is as follows:

As you can see, the two netorare manga he has released have sold incredibly more than his other work combined.