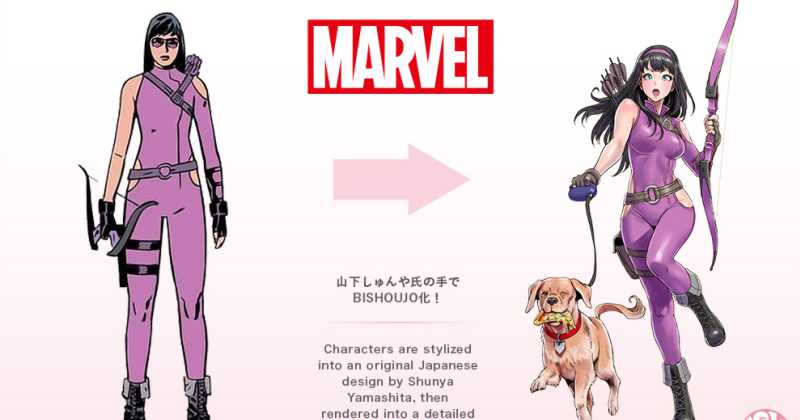 Then the following post was made, comparing the character Kate Bishop drawn by Americans and by Japanese. “Great contrast of how America and Japan approach character design” says the publication.

The publication above shows Kate Bishop in the American style, illustrated by Marvel, while on the side we have the same character drawn by Japanese artist Shunya Yamashita.

Shunya Yamashita has done art for several Marvel, DC and movie characters in a line of Kotobukiya figures called “BISHOUJO”, so all the characters come out extremely cute. Below for example is how he drew Captain Marvel:

Another thing I have to point out is that the image above was not made by the person who posted it, it is an official image used in the promotion of the figure. after the above publication was made, several comments were made, as the examples below:

The one to the left looks like made by an absolute beginner. That's it, this isn't even about manga/anime style being inherently superior because comic books have shown to have superb illustrations; it's just that the quality of art in comics has decreased abysmally.

They are literally the same design just in a different art style pic.twitter.com/MZGsHsyRpz

4. But fact is that Comics and Anime don't have that contrast. It exist on some adaptation but not in general. First I can post a lot of Hawkeye comics version who's sexy as hell. And then the chara-design don't change here. The comics version still have that sort of leotard pic.twitter.com/GKot0typOD

Not the first time Marvel did this. Some time ago they made the same artist do a Japanese exclusive cover for the Unbeatable Squirrel Girl,and it had nothing to do with the official product.
Not comparing the art styles,just saying that Marvel likes to bait people with bishoujos pic.twitter.com/f83jiyjs2a

Like if every frame looked as polished as the manga one. Holy shit comic sales would go way the fuck back up

And the discussion went on and on, obviously this discussion of Kate Bishop drawn by American vs Japanese will lead nowhere as everyone prefers a drawing style. I took a look at several official Kate arts and none of them pleased me, but I’m not into Comics like I used to be years ago.

Anyway, what do you think?