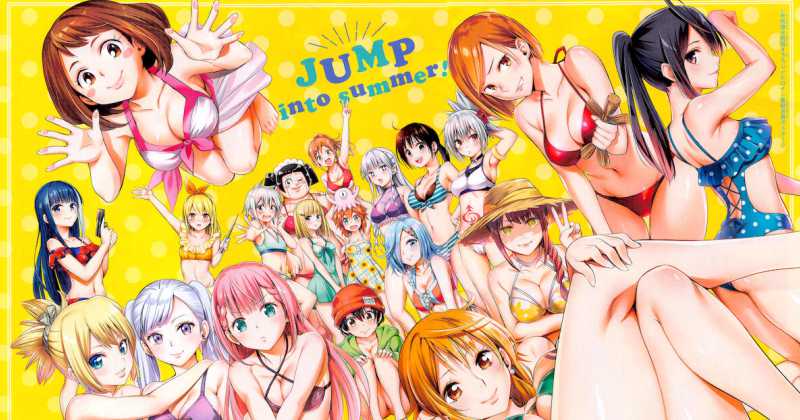 Shonen Jump is the most famous manga magazine in the world, the target audience is young boys, and usually its stories feature manga about protagonists with powers on adventures facing powerful villains in the styles of Dragon Ball, One Piece, Naruto etc.

But something that also happened a lot in Shonen Jump was ecchi, several ecchi manga were published in the pages of the magazine, such as To Love-ru, Yuragi-sou no Yuuna-san, Ayakashi Triangle, Shokugeki no Soma.

And even in classic shonen manga, there were lots of ecchi scenes, just get Dragon Ball that always had ecchi. Naruto also had some scenes, One Piece, etc.

But if we look at today’s Shonen Jump, the ecchi is disappearing! Classic fighting manga are with less and less ecchi scenes, Ayakashi Triangle which is the current great ecchi manga has been moved to Jump+. Because of this, an otaku anonymously posted the following on Hatelabo: Ruri Dragon is a manga about a high school girl who ends up discovering that she is half human and half dragon, so far the manga has not featured any ecchi.

The above post (which has since been deleted), caused the following reactions:

“Every Ero manga is being uploaded to Jump+, boobs can be shown as much as you want (web version only, app is still censored).”

“I think that eroticism is a necessary essence. Eroticism is essential for the healthy development of youth”

“Jump’s editorial department is losing the minds of boys”

“You are not evolving, you are imposing values, when times change, they will change again”

“Light eroticism in shounen magazines is a must”

I hadn’t really noticed that, but really, you don’t see much more ecchi in Jump right?